Mr. Rabbit is the codename of the head of the Network and Philip Carvel's partner on the original Janus project. It is a malleable title held by several characters over the course of the series.

Rabbits are a major symbol and motif throughout the series, representing danger, control and fear. Within The Utopia Experiments, the devil appears to the scientist in a variety of forms, "but always as an animal-human hybrid, most notably a rabbit."

In the Amazon remake of Utopia, Mr. Rabbit is a codename that seems to be shared between two characters: Dr. Kevin Christie and Katherine Milner.

The search for the identity of Mr. Rabbit is a major plotline in the first series. The true name of Mr. Rabbit is inside the Utopia Part 2 manuscript, and is ostensibly the reason the Network is so invested in trying to get it. According to Grant, the name starts with "L."

Though Jessica Hyde is the first character to mention Mr. Rabbit (during her explanation of the history of the Network), Milner is the one to deliver the major explanation of who exactly Mr. Rabbit is. According to her, Mr. Rabbit got his name when he was an undercover agent in Guangdong during the Cold War. He was playing the CIA, the Russians, and the Chinese gangs off of each other, but he made a mistake and was found out by a crime boss, who dragged him through a busy office block and taught him a lesson by carving the boss' own name, the Chinese character for "rabbit," into his stomach. Milner claims that if you were to kill Mr. Rabbit, the whole Network would be finished.

The gang of fugitives first suspect that Pergus Holdings CEO Lane Monroe is Mr. Rabbit, but when they break into his apartment they find no scar on his stomach. Next, they suspect it may be Conran Letts, but he doesn't have it either. When Jessica retrieves the manuscript from Arby's hiding place, they find out that the "L" stands for "Letan." Wilson Wilson and Jessica are able to track down a reference to Letan in the footnotes of a Defense Department meeting of the Committee of Genetic Discovery; Michael Dugdale is able to identify the Assistant in a group photo of people at the meeting, and Jessica and Wilson set out to kill the Assistant. They are beaten to the chase by Grant, who kills the Assistant in order to escape from captivity in the basement of the Corvadt building. Grant checks the man's stomach and finds the scars.

Believing their mission to be over, the fugitives relax somewhat, and it isn't until Jessica is in Milner's office preparing to hand over the manuscript that she realizes that Milner is, in fact, the real Mr. Rabbit. She is unable to get away in time and Milner takes Jessica captive.

In the 1970's flashback episode, some light is shed on the origin of the Mr. Rabbit title. Milner is referred to at different times as Milner, Letan, and Mr. Rabbit, and it is unclear which, if any, is her "real" name. The Chinese gang story is most likely entirely fictional, since it is implied Milner came up with the idea for the Assistant to scar himself to avoid her being found out.

Over the course of the rest of the season, Milner takes on Wilson as her protege, teaching him about the innermost secrets of the Network. She is impressed by his dedication to the cause, and she convinces him in the rightness of what they are doing, coaching him in how to get past his squeamishness about violence. After Milner is killed by Grant, Wilson takes on the role of Mr. Rabbit, carving the scars into his own stomach.

"Once upon a time there was a little girl named Jessica Hyde. Jessica Hyde had a daddy who was a genius scientist. Now, Jessica Hyde and her daddy were held by an evil villain named Mr. Rabbit..."

In the mythos of the Dystopia and Utopia comics, Mr. Rabbit is said to have kidnapped Jessica Hyde's father and forced him to create horrible viruses which were then unleashed upon the world. Eventually, Hyde escaped, aided by her erstwhile protector Artemis. Mr. Rabbit is depicted in many scenes from Utopia, drawn as man with the head of a rabbit. In various scenes, he is shown holding a box filled with pigs, standing behind Hyde and having variously tied Hyde's father to a tree, trapped him in a cage, or placed a gun to his head. The cover of Dystopia depicts him holding a Jessica Hyde doll, while the cover of Utopia depicts Hyde holding one-handedly a withered version of him, his entrails dripping out the bottom, sitting on a rock outside some distance from her childhood house at Home.

The identity of Mr. Rabbit is unclear, though it seems to possibly be a shared name between Kevin Christie, the leader of the Harvest and Katherine Milner. When Jessica Hyde returns Home, Milner refers to herself as "Home," telling Hyde that the Utopia comic was only bait to bring her back Home. She then knocks Hyde out and leaves her laying on her bed upstairs before going to the house's basement and informing her father that she's found his daughter.

Milner tells Ian Ackerman and Becky Todd that after 9/11, the U.S. government recruited a group of scientists to create deadly viruses in order to try to win the biological arms race. Unknown to them, there were a few rogue scientists within the group, who became the Harvest, controlled by Mr. Rabbit. In 2002, Mr. Rabbit made a deal with a group in China to provide them a particularly vicious strain of flu. His clients reneged, so he went to China and killed more than 800 people. They caught and tortured him, then released his identity and set him loose, a game to see who would kill him first. Instead, he himself went around and killed everyone who might knew who he was, then went underground. 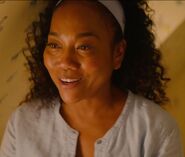 Add a photo to this gallery
Retrieved from "https://utopiatv.fandom.com/wiki/Mr._Rabbit?oldid=5556"
Community content is available under CC-BY-SA unless otherwise noted.